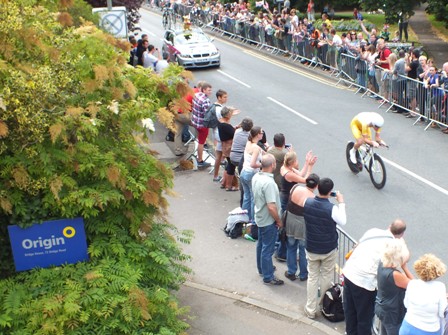 The Olympics around Hampton Court Palace

Origin’s UK offices are about 5 minutes from Hampton Court Palace – the center of Olympic cycling.  The festivities here started with the lighting of the Olympic torch on one of the Royal barges.

Then last weekend, the men’s and women’s cycle road races went through our town on the way out and then again a few hours later on the way back.  They say about a million people lined the streets and watched the races.

Then on Wednesday the men’s and women’s time trial started and finished at Hampton Court Palace.  We had front row seats as the men cycled past our building…a dream brand identity opportunity!  The whole town was buzzing.

I was also lucky enough to go to a morning swimming session and spend the day in the Olympic park.  Overall having the Olympics in London has been an incredible – once in a lifetime experience.